Ashes to Ashes, Dust to Dust

Does your aging loved one have a burial plan? Do you? 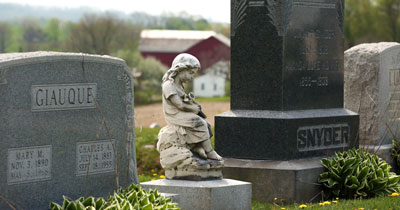 Photo by Randy Fath on Unsplash

Since we cannot control when we depart this earth, most of us have a preference as to where our bodies are laid to rest. When we finally shuffle off this mortal coil, there are a wide variety of options of what to do with our earthly remains.

Most often people will have their bodies buried (below or above ground) or opt for cremation, the ashes of which may be interred or otherwise memorialized. Islam and Judaism prohibit cremation, while in Hinduism cremation is the preferred cultural tradition.

Burial of a body can vary widely:

Cremation and what to do with the ashes also varies greatly:

Burial at sea is still widely practiced, especially by those in seafaring cultures and maritime occupations, as well as by private citizens across the globe. Burials at sea typically take place from a ship/boat or sometimes aircraft as part of tradition, but also to make certain bodies are far enough away from land. Proper precautions (such as ensuring the body sinks, wrapped for burial so decomposition can readily occur) are practiced helping guarantee that the sea and nature can properly attend to the remains as effectively as possible.

In Jewish tradition cremation is prohibited and burial is to take place as soon after death as possible. The body is traditionally prepared as to allow decomposition, therefore embalming or other means of preservation are not utilized (hence the need for a swift burial). Also for these reasons, displaying of the body prior to burial (viewing) typically does not take place.

Similarly, funerals in the Islamic faith also calls for burial of the body as soon as possible and cremation of the body is forbidden by sharia (Islamic religious law). According to tradition bodies are bathed and shrouded, with the final resting placement of the body so as to face Mecca.

Unlike Jewish and Islamic faiths, the Hindu culture has a tradition of cremation. Typically, cremations take place outdoors as part of the funeral ceremony, with the body of the deceased placed on funeral pyre. Traditionally ashes would be scattered in the holy river Ganges, the nearest body of water, or place of importance to the deceased. Burial is also becoming increasingly widespread throughout the Hindu culture for a variety of reasons including influence of Western culture and diaspora of the Hindu culture to places where traditional cremation is forbidden.

Christianity has vacillated throughout time and across denominations on the preferred practices of burials and body disposal of the dearly departed. Both burial and cremation are acceptable practices, with neither falling extremely out of favor at any given period.

Although the terms cemetery and graveyard are often used interchangeably, historically a graveyard refers to a burial ground within a churchyard. Consecrated land where the remains (bodies or ashes) are buried in a grave or interred in a tomb, crypt, mausoleum, columbarium, etc.

Modernity and population booms lead to limited space for new arrivals needing burial in consecrated church ground. New places of burial, independent from churches and their graveyards, were established away from the heavily populated city centers. These newly established cemeteries were often secular and municipally owned; in later years cemeteries became privately owned and operated.

Death is universal and there are a diversity of beliefs and practices on how to handle and dispose of human remains. In many cases, the manner of disposal is dominated by cultural and spiritual considerations. In addition, public health interests realize that corpses present both sanitation and health concerns. Soft tissues begin to decompose quite rapidly (hence the need for embalming if not burying immediately) although bones remain for decades and centuries.

Although there are still cultures and funeral practices that retain traditional (and some quite fascinating) characteristics, most of us are used to the “modern” mortuary services familiar in Western society. These post mortem practices involve undertakers, embalming, viewings, caskets (that often inhibit rather than hasten the decomposition process), and cremation facilities. In most industrialized nations corpse handling and disposal, cremation services, and burial grounds are all highly regulated.

As our loved ones age, we must look ahead to their mortality, as well as our own. Death is rarely a comfortable subject; yet having an understanding of what one’s wishes are for their earthly remains is a kinder topic than you may expect. Having a brief understanding of your aging family member’s thoughts and wishes on their burial can actually be a reassuring discussion. Their expectations of their body’s life after their death may surprise you! Don’t discount the desire to donate one’s body to science or shooting cremated remains into orbit-you’ll never know unless you ask!