Gray and Gay, Love and Marriage

Why does federal legalization of same-sex marriage matter? 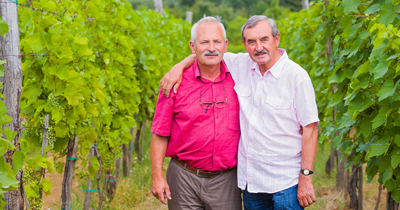 Have you ever noticed that young children, when uninfluenced by outside sources, will accept others indiscriminately? Children will interact with others unaffected by their new friend’s race, color, religion, gender, sexual orientation, national origin, age, and/or special abilities (disabilities). Almost as if they are the authors of the Equal Opportunity Employment Act, children are known for and lauded for their capacity of unbiased acceptance. Certainly, some points may spark curiosity and intrigue; but prejudice, bias, and discrimination are all concepts yet to be discovered. Children have not yet been exposed to enough cultural mores and social constructs to infer when something is considered outside the ordinary. The concept of gay, straight, homosexual, and heterosexual is yet to be discovered. Love is a boundary-less concept that extends to friends, family, inanimate objects, and kind strangers. Love is, quite simply, love. Perhaps little ones are too liberal with their love; better too liberal with our love than too stingy.

Homosexuality is not a modern era origination. Prevalent throughout history from the cradle of civilization in ancient Egypt and surrounding Mesopotamia, to Ancient Greece, to pre-Conquest Americas. Also prevalent throughout history are those that denigrate same-sex love and coupling. So is it any surprise, that even in the year 2018, many still choose to keep their most personal feelings secret?

The term “coming out (of the closet)” is a metaphor for self-disclosure of one’s sexual orientation. It is usually in reference to children opening up to their parents and loved ones. Parents to their children is a distant second. What about aging parents to their adult children and grandchildren?

More than 50 million people in the U.S. are age 65 years or older including approximately 2.5 million people (5%) who identify as lesbian, gay, bisexual, or transgender (LGBT). This statistic is repeated through a variety of sources from self-reporting Gallup polls to studies by AARP to estimations by the American Psychological Association.

As the Baby Boomer generation ages, the US Census predicts that the older adult population will almost double from its current 12 percent to an estimated 20 percent of the population by 2030. The percentage of the LGBT population rising in proportion as well.

Social constructs, mores, and attitudes have seen many pendulum shifts throughout history and cultures. However, many of our elders have been through their coming of age when LGBT identity was shunned, classified as a mental illness, and even illegal. In the US homosexuality was declassified as a mental disorder only in the mid-1970s with social policies and acceptance (still) lagging far behind.

Until recently LGBT adults were excluded from full participation in civil marriage. In 2015 the Supreme Court ruled same-sex couples have the constitutional right to marry, overriding previous judgements and state attempts at blocking same sex marriages. This is a profound policy implementation that has and will drastically and positively affect many of our aging LGBT citizens.

The past few decades have been a back-and-forth of laws and court rulings both for and against same-sex marriage. The most consequential of these rulings was 1996's Defense of Marriage Act (DOMA), which defined marriage in federal law as the union between one man and one woman. This allowed states to not recognize same-sex marriages performed in other states where same-sex marriage was legal. Why does state recognition matter? Because residing in a non-supporting same-sex marriage state could exclude the married couple from private, state, and federal marriage benefits.

Why does federal legalization of same-sex marriage matter?

Aside from the vast social implications of civil rights, federal recognition of same sex marriages across federal and state governments are associated with quality of life issues. The positive benefits associated with marriage are reflected in countless research. Married couples experience a better quality of life as measured by factors such as: increased happiness, longer life, better overall health, more economic resources, and more social/community resources.

What does this matter for gay couples who have been systematically discriminated against, excluded from legal marriage, and denied basic mainstream legalities? One would think, especially with the current divorce rate, a better system of civil coupling would have been invented. Yet, despite personal views on marriage and viable alternatives there is a very clear benefit to federally sanctioned, legal marriage: money. Social Security, Medicaid, insurances, pensions, inheritance laws, tax laws, and retirement plans have historically denied same-sex couples key benefits afforded to the broader (heterosexual) population.

Now Grandma can legally marry her same-sex life partner and be entitled to all the financial benefits as when she was married to dearly departed Grandpa!